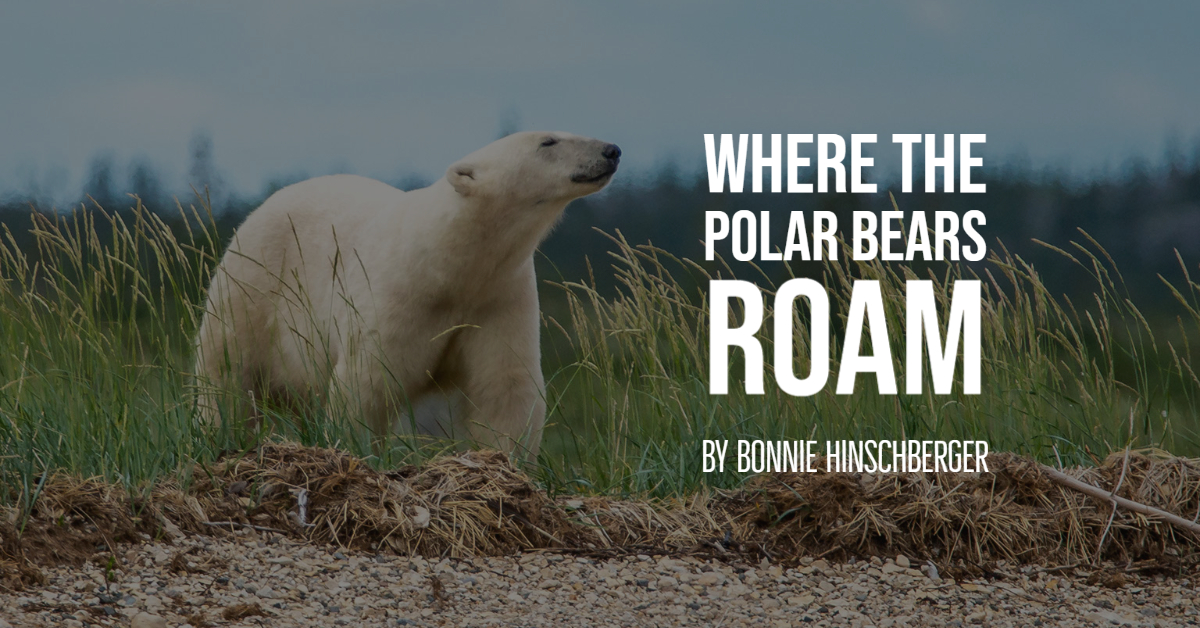 Where the Polar Bears Roam

I recently travelled to Churchill on the edge of Hudson Bay.  I am always mesmerized by nature and particularly enjoy observing animals in their natural habitat.  With the uncertainty of borders being open for the 2021 bear season, I had a rare opportunity to secure space for a small group to experience the annual polar bear migration.  And what an experience it was!

The town of Churchill is much smaller than I had anticipated.  Absolutely everything is within walking distance but venturing out on your own is not advisable.  Yes, the very first bear I saw was right in the middle of town by the train station!  Was he hitching a ride out of town?  Our driver was quite happy to place a call to the 24/7 emergency bear alert hotline which would initiate a patrol team to immediately arrive on scene and scare the bear away.

Bears that persistently return to town are captured by the patrol team and placed in the Polar Bear Holding Facility, better know as “Polar Bear Jail”.  Depending on the timing of their capture, the bears are either held in the facility until the ice freezes and released on the ice or transported further north with hopes of them not returning to town.

After a tour of the town and surrounding area, and a little incident with getting stuck on an icy road and rescued by another bus – hey, it’s everyday life in the north – it was time to experience the old traditional mode of transportation – dog sledding in the boreal forest!  Listening to stories about the history of the Metis and how they have passionately continued the dogsledding traditions was fascinating, but the thrill of the ride and the excitement of the beautiful, friendly dogs stole my heart.

I rose early the next morning with anxious excitement for my upcoming days on the Tundra Buggy.  Would I see bears?  Would I be close enough to take pictures?  What was it going to be like?  I could hardly wait!!

The Tundra Buggy in and of itself was an experience.  Designed to traverse through the bumpy, icy, and rugged terrain of the tundra, these vehicles are both comfortable and practical.  The indoor section was heated with lots of large windows at the front and sides for viewing.  At the back, there was an outdoor balcony, a great place to take photos if you wanted to brave the cold and wind.

Our driver Bob and our interpretive guide David were phenomenal and within a few minutes we had spotted our first polar bear.   We sat quietly watching the bear saunter across a small ice-covered lake, oh what a thrill!  Further along and for the rest of the day, we saw bears.  Often, we would stay in one place observing their behaviour.  They’re slow moving this time of year to conserve energy until they can hunt, and they often stayed in the proximity of our buggy.  The curious ones would, on occasion, walk right up to our vehicle and sniff our boots from the bottom of the balcony.  The photo opportunities were incredible and being this close to a polar bear in their natural habitat was so surreal and exhilarating!

As part of the annual migration, polar bears from the Western Hudson Bay population congregate every fall in Churchill, patiently waiting for the ice to freeze.  The bay by the Churchill River is the first to freeze and the bears instinctively know this.  Every spring when the ice melts, the bears are forced onto land where they spend the summer conserving energy and waiting for the ice to form again.  When they arrive in Churchill, the bears are hungry as they haven’t eaten a full meal since the ice melted. Though excellent hunters, they are only able to hunt ringed seals, their main food source, from the top of the ice, catching them as they rise to the surface for air.

The second day on the Tundra Buggy safari was equally incredible.  Often males could be seen challenging each other in a friendly match, a way to build up strength for the hunting season ahead.  One of the females had a cub, likely just under 2 years old.  Watching the interaction between them was fascinating with similarities to a mother/child relationship in humans.  The cub, becoming very independent at this age, will likely be left to fend for himself sometime over the winter months so mom will be able to mate and produce another cub or two next year.  And so the cycle of life continues.

Cubs are born in December, so when I was there the pregnant females would have been in their dens east of us but still in Wapusk National Park.  This protected area is one of the world’s largest known concentrations of polar bear maternity dens.

In total, our group saw 16 bears the first day and 26 bears the second, 2 red foxes and several ptarmigans.

As the sun set and this last day in the tundra drew to an end, it was time to reflect on what an extraordinary adventure this had been.  Having the privilege to visit Churchill, to witness the immense beauty of the Arctic and to see the mesmerizing polar bears is a travel indulgence I will never forget.

Throughout the tour it was very evident that wildlife conservation, polar bear research, habitat protection, Indigenous traditions and culture are all integral to the sustainability of Churchill.

For more information about the research being done on polar bears in Churchill visit Polar Bear International. https://polarbearsinternational.org/

Please select a valid form
Post Views: 134
Sign-up for our exclusive Vacation Newsletter - Just Ask Ellison
Subscribe to our weekly vacation deals newsletter!
DON’T MISS OUT ON OUR WEEKLY TRAVEL DEALS NEWSLETTER!
JUST ASK ELLISON
Be the first to get latest updates  and the best travel deals,
delivered straight to your inbox.
Give it a try, you can unsubscribe anytime